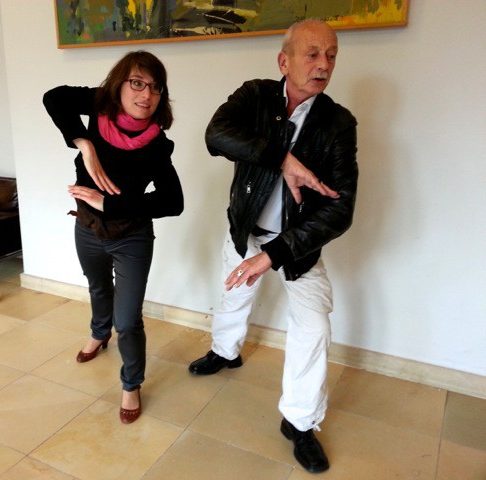 »I am worth something«

Talking about longing, happiness and poverty with dancer and choreographer Royston Maldoom

UZ: Mr. Maldoom, you decided with 22 to become a dancer. This is a late decision to become a classical dancer. How did you know you could do it?

Royston Maldoom: I suppose I somehow just assumed that if I trained I could. Then when I actually started I discovered that it was not quite so easy. But I made my decision, and that was to go as far as I could.

I made my decision, and that was to go as far as I could.

UZ: How far did you get?

RM: I had to learn my limitations, because of my age and my body and my size and a lot of other things.

However it turned out to be a tremendous advantage because I went from course to course to course and in the course of trying when I could’nt achieve something myself I really learned why not, and I think I learned more about how it worked. Perhaps I also had to think about what is the essence of dance. So I realized later it was a great advantage for me as a choreographer, especially for working in the community.

UZ: You have been training for weeks with people who have experience of poverty and you put together a choreography with them. What is special about projects like »Tanz zwischen den Welten«?

I did not give up just because I had nowhere to live.

RM: Most people I work with have a very low opinion of what it is they can achieve. They just don´t know their potential. We never know our potential. And very often someone comes along and believes in us and says: You can do this! That’s the thing that gets us to the next stage.

So when I go in a room with 30 or 100 people I am the only one who knows how amazing they are going to perform in three weeks. No one else does. I have got to behave to them on day one with my knowledge of what it is they can do in three weeks. Not where they are now. Because if I start working nicely where they are now, I’m going to set a piece which is at that level and they will be very frustrated in two weeks time, when they are capable of doing much more.

Very often someone comes along and believes in us and says: You can do this! That’s the thing that gets us to the next stage.

UZ: How can people use the experience from for example a dancing class in their daily life?

UZ: … even if everybody else tells you the opposite.

RM: That’s very often why people think they are worth nothing. This is what poverty does. What is it about poverty? We have all heard of people in difficult times, after the war, when people had so little. They were not put down by being poor. People had a pride in being working class or peasants or whatever. And how other people in society see us is what we absorb and get the feeling that we are not worth anything.

UZ: So can dancing affect poverty and unemployment?

RM: What is poverty? Poverty is a problem, but often relative poverty is not about starving. It can be, but often it is more about the effects of poverty on you psychologically. It is how society treats you. That affects people. Like a child. A child feels how it is seen and grows up according to that. If the parents think the child is really capable of something the child will be like that. If the child is reflected that it is of no value, then the child will take that.

It is not lifting people out of poverty, that you can promise. But you can think a long way to lift people up out of the effects of poverty.

UZ: If we take talent, discipline, routine, determination, fun and longing for something. What would you say is the most important one of these, if one wants to change his own situation?

RM: Longing. The desire to do it, is the absolutely important one. About talent I would say: The world is full of talented people who have done nothing. And the world is full of far less talented people who have changed the world. A talent, if you got it, if you can use it, is an extraordinary thing. Sometimes when I see something, I don’t see talent, I see desire to do it.

UZ: What about discipline?

RM: Discipline is inevitable. Anything you want to achieve in life, it is impossible without and that just doesn’t go for the arts, which require an immense amount of discipline. Especially in dance which is so physical: every day and every day you have to be there and you have to do that warm-up. You become a slave to your body. You are working for hours. Of course you need discipline to get to the point you want and you need it to sustain that as you get old. And it is the same sort of discipline that you need when you go and apply for a job.

UZ: If somebody comes to you and tells you: I can’t. What do you tell them?

RM: That is very hard. Because it is true that there are external limits to what is possible. Always. And it would be very arrogant to tell somebody in that situation to achieve what I was lucky to achieve in my situation with much more support. However, what you have to say is: If that is what you want, then you just have to pursue it as far as you can and hold it in your mind. And the main thing is: Don’t imagine the blocks to early.

Don’t go around complaining you have no money. Only panic if you have no vision. Don’t imagine the blocks to early.

UZ: You are speaking out of experience?

RM: You see, I had no money when I started dancing. But every school you went to you were supposed to pay. You had to live somewhere. Well, I ended up living on the street for quite a long time. I slept in the public toilets in London with the drug addicts and everything. And at 10 o’clock I had to be in a ballet class. But the main thing was: I was going to do the ballet class. And as far as the money went, I just stood there and in this different schools when they said: Well, have you got the money?

I said no, but you have to take me. I said, look, I do anything, I can paint your house, do your garden, I run errands, whatever, but you have to take me. I have to be here. And people responded to that. So I was tought for free the whole time. Because I just knew that was what I had to do. And I suppose my determination made everyone else determined. And I did not give up just because I had nowhere to live.

UZ: Do you ever have the feeling that you don’t have the power to continue?

UZ: And what do you do then?

Royston Maldoom was born in 1943 in Harrow, London, England as Royston Keith Maldoom. He is an actor, known for Rhythm Is It! (2004), Tanz um dein Leben – Royston Maldoom (2008) and Imagine (2003). He was awarded the OBE (Officer of the Order of the British Empire) in the 2006 Queen’s New Years Honours List for his services to Dance. The 7th of May 2015 I met him in Hamburg, when he was presenting the dancing project »Tanz zwischen den Welten«, a cooperation with der Paritätische Hamburg.